In December, we barely knew what we were doing as we quickly put together the most beautiful funeral service we could. We wanted to include everyone who wanted to come. But the chapel at the cemetery was tiny. We could only accommodate 100 or so people. Plus it was the holidays. A few dear friends were away and we didn’t want to put pressure on anyone to come. So we held our small service and I announced that we would have a big memorial service at some future time.

But honestly, the service on December 30 could not have been more perfect. The large, luminous portraits of Caitlin gracing the walls, the stained-glass windows, the music, the friends who spoke, Uncle Mike’s tribute film, the service program, the atmosphere–all was perfection and we can’t imagine repeating it.

So there will not be a memorial service, per se.

From the very beginning, Nick knew that he wanted to build a private mausoleum for Caitlin, one made of stone. In December, he found a beautiful little knoll at the cemetery and arranged to procure it. He originally planned for the new structure to be ready in July, in time for Caitlin’s birthday, but instead we had to deal with six months of red tape from the town. At long last, we have now received permission, and Nick will build something beautiful, magical.

We are collecting heart-shaped rocks to use in its design and construction. We found a few on the beach at Provincetown last week. 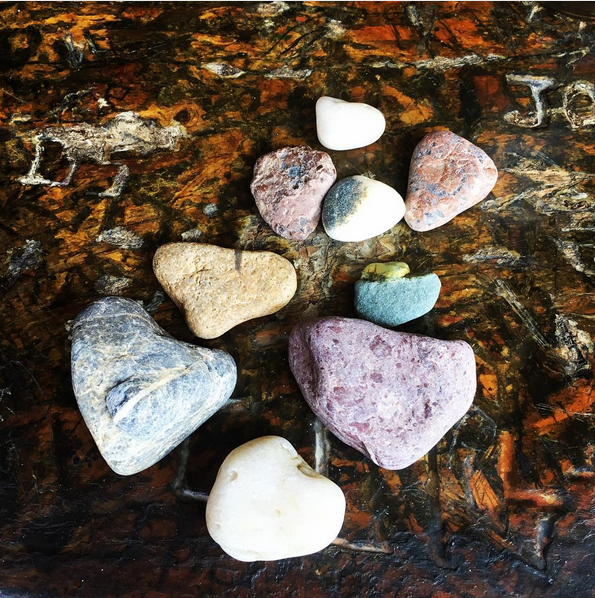 And others have already started collecting them for us!

If you would like to contribute a heart-shaped rock to Caitlin’s memorial, we would be honored to include it. The address is 11 Cordaville Road, Ashland, MA 01721

At some point after it is constructed, we will have a dedication of some sort. I will post about it when we do. I’d like to think it could be soon, but…….

What the Medium Said

One of Caitlin’s friends, back in January, visited a medium, as I’ve mentioned before.

Medium to friend: Do you know if her parents were thinking of putting a memorial place that has some rocks in it? She’s showing me no, not Plymouth Rock but rocks. They may move rocks around, make sitting places on the rock? Not a place where people would frequently visit but you would walk past it or something.

Medium: In the 15-16 years I’ve been doing this work, I’ve never been shown a mausoleum. I think Jim Morrison is in a mausoleum. Okay, she’s saying “yes yes yes. New is the way to go.” She is talking about creating a shrine or mausoleum–they look the same to me. She’s saying, “No, we make our own garden, a place where people can come and visit, where no one can bulldoze it.”

Medium: I feel that … so she passed away before Christmas?

Medium is quiet a moment, says she’s trying to understand what she’s being shown. Then says:

It’s a rainy day, people in cars, windshield wipers… brave ones endure cold rain, It’s fall, close to Thanksgiving, before Christmas, we have come together for an unveiling of something to do with rocks, a place made of stones, beautiful stones, she’s saying “this will be my gift, the gift of the people to me, and I will love this gift, she’s putting trust in people to do it as they are inspired to do. I feel that someone in the group of friends has what was supposed to be my Christmas present, a mug or something, that we are toasting, and we are saluting life. Like when Jewish people say l’chaim, toasting to life, ‘And I will be there with you.” I also see where this garden will be, there will be a few stones put in place on the ground, flat stones, I don’t know if they are man made or with hand prints, something written in them, cement? We are writing love messages in stone or concrete that are there forever, “a beautiful shrine in my memory and I love it.”

To everyone who has sent messages, thank you so much. I’ve been slowly trying to get through them and respond with postcards I made. (I want to.) But there are hundreds, and at some point someone ‘helpfully’ took a bunch of them out of their envelopes, so I don’t always have addresses and can’t always read handwriting. I hope to eventually write to everyone.  Please know that all the reaching out has meant everything to us.

At an event the other night, someone asked me how we were doing, said, “There must be good days and bad days?”

Actually, every day is a mixture of both good and bad. Sometimes more bad than good. That’s the honest answer.

This is a tough month, her birthday month. She loved being a July baby, a Leo. We will be celebrating the day on the Vineyard with some of her closest friends, remembering how much she loved that island, and grateful that she had so many good life memories.

A note she wrote to a good friend while waiting in Pittsburgh:

i am longing for a new england feeling day.  even as i type it i can feel the feeling of just being somewhere like that.  going into a place to get an iced coffee.  heading to the beach.  walking around a rental house. packing a tote bag.  ugh, i miss martha’s vineyard.  for a couple summers we were renting this little house in chilmark.  i found it the first year, and it was actually kind of a dump.  very rustic, but clean…and i LOVED it.  my mom liked it too, but only for a week, and my dad was skeeved out by it haha.  but i dont know what it was, i kind of LOVED that it was so rustic. my friend jess’s mom lives in chilmark, and so jess would always go there too, and some of my happiest memories in the past few years are of being there in the summer when she is there.  because her house was right down the road.  we’d have our cars there, and it was like being on vacation together, but also in high school…because we were “living at our parents” sort of.  i’d call her and pick her up 3 mins later…we’d drive around, spend basically all day and night together doing lazy stuff. and i would be a total hippie, and never watch tv, and read all the time.  one summer for 2 weeks i didnt wash my hair.  hahahaah you are probably so grossed out. i would take showers of course, and go in the ocean and get it wet, but i didnt wash it, i just would braid it and brush it and keep it tied up in a scarf.  it was weird, it didnt even look that bad.  and when i went home to boston i washed it and it was AMAZING – my hair was like a commercial.

anyway i miss that so much.  its probably the most relaxed ive ever been.

One thought on “JULY 10 — Announcements”