A courageous ray of light.. 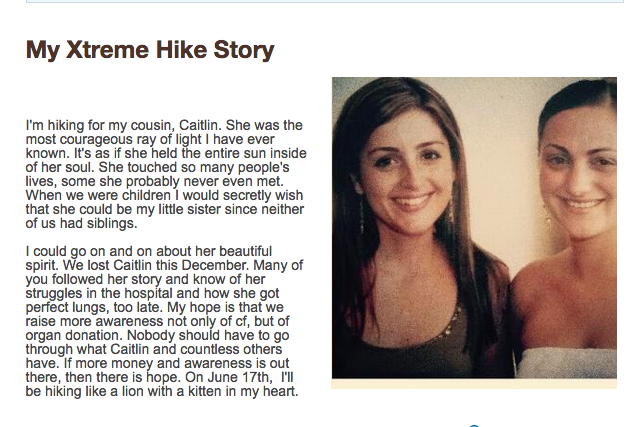 Caitlin’s cousin Melissa is a sweet and noble soul, and her write-up for the “Xtreme Hike” (30 miles in one day) that she is training for in honor of Caitlin, to raise $$ for the Cystic Fibrosis Foundation, both breaks my heart and uplifts it at once.

Caitlin was ‘a courageous ray of light,’ she writes, and this photo, from Melissa’s wedding day, reminds me of just how true that was.

The wedding had been planned for months. We were hosting the ceremony at our house, under the beautiful willow tree by our river. Caitlin would be a bridesmaid.

But just before the wedding, Caitlin got sick. She had to start one of her 3-week courses of IV antibiotics. Besides being sick enough to need 3 weeks of IV meds, taking them always knocked her flat. Typically, there was a 1-hour infusion of one heavy-duty antibiotic every 8 hours, plus a 4pm-ish dose of another one—- usually the worst one—- the one that would really make the nausea kick in and make her lie down and say, ‘Suddenly I feel awful!’ As if she was surprised. Even though it happened every day.

But this particular June, she worried. She didn’t want to let Melissa down, but she also didn’t know how she would ever make it through the day: the morning preparations that would be taking place in our house, the ceremony itself with all that standing, the 4pm infusion and then the hours of the reception.

But make it through the day she did. And aside from the telltale bandage that always covered her IV lines, she never let on that she felt like anything other than the supportive bridesmaid and loving cousin that she was. Because she didn’t want any attention on herself, and especially didn’t want Melissa to worry about her, or feel bad, in any way, on her wedding day.

Sweet Melissa (yep, named after the Allman Brothers song by my hippie-ish brother Billy, her dad), is grateful for the support she’s received for this hike. She’s psyched to do it, and she’s training hard. It happens in June.

Caitlin had really hoped to participate in these kinds of fundraisers after transplant. She had hoped to do a lot of things. Hike. Run again. Climb stairs.

But let’s not forget that she did get to do a lot of things, like live beyond birth, that a CF kid 50 or 100 or many more years ago would never have been able to do, thanks to all the research that so quickly benefited her after her diagnosis, and which continues to benefit other sweet and wonderful beings.

It will be fascinating to see what the future holds. We are still so primitive in so many ways.

This was our little family unit, not all that long ago—♥️—here on our beloved St John, where Nick and I are now.  It's our third trip back without Caitlin and sometimes I think we are torturing ourselves because it's all so beautiful here, so much a part of our history, that the memories are almost too close, perfect and painful at once. I was on Francis Bay beach the other day, and had to put on my sunglasses to hide my eyes. Francis is the beach we most often visited, to tuck under shade trees and read for a few hours before heading out to Shipwreck Landing (smashed to bits in the hurricane of 2017) for rum coladas and conch fritters. As I wept behind my sunglasses, a dinghy from a sailboat approached... I did a double-take, trying to discern what kind of little critter was at its prow. Was that a cat?  I've seen many dogs on boats, and once, on Martha's Vineyard, a chicken, but I'd never seen a boat cat. The dinghy beached, and this bold, beautiful kitty sprang onto the sand like she owned it. She’s Miss Rigby the boat kitty, and I got to hold her. Later that  night, I cuddled a little Yorkie named Gravy. Animals! They provide such joy and comfort. Humans do, too... we’ve spent some wonderful hours with good friends who were on-island too.... 🙏🏼✨✨ You can’t help but make memories, so you may as well make them good ones. @miss_rigby_boatkitty #caitlinohara #cf #memoir #signs #motherdaughter #littlematches #petsofinstagram #pets #
Nick snapped this beautiful photo an hour ago .. just an iPhone pic catching some late-day light. And these two little birds, 🎶 pitching by our doorstep, each night here in the #virginislands ..🎶🎶
Time. I’ve always had a complicated relationship with it. It’s always hurting my head. I’m the kind of person who constantly thinks, “One week ago, __ happened,” or, “Exactly two years ago on this day, we were ___ ”  or “How can it be ___ since _____, when it feels like maybe 3 weeks ago at the most???” On New Year’s Day 10 years ago, I woke up to a text from Caitlin: “1/1/10. Caitlin: Love you. Love when I see the new year. It’s all just a weird time construct but I hope I see blue moon 2015!! Love you so much.” .... She was still living independently and rarely talked about long-term survival, but transplant was looming. Transplant was on her mind, and it showed in that confession of uncertainty tucked inside the bigger message of optimism and love. ... She did see that blue moon, in Pittsburgh, five years later. ... I write about it on 9LivesNotes today. Link in bio. ...#cysticfibrosis #cf #organtransplant #memoir #motherdaughter #youdontlooksick #time #personalgrowth #littlematches
Happy Christmas memories of friends, family, @kittencaitlin @thatpuphenry and barrel parties. 🎄🎄🎄 #christmasmemories #memory #memoir #littlematches #holiday
It was the 18th of December when she finally got her transplant after nearly 3 years of waiting. Tonight I’m thinking of the donor family, who are grieving this 3rd anniversary, too. #cysticfibrosis #organdonationawareness #littlematches #memoir #motherdaughter
Blue gloaming. During the anniversary of loss, what helps? Tradition. Memory. The natural world. #cysticfibrosis #letterstothelost #caitlinohara #mothersanddaughters #littlematches #memoir
Naughty and nice. 🎄 . #marriagestory #holidayseason #writersofinstagram
Great reminder from 2 years ago: persistence pays off. @harperonebooks
Some ghosts of Thanksgivings past ... 🍂 #cysticfibrosis