Big Sur. I had it in my head that we needed to get here. 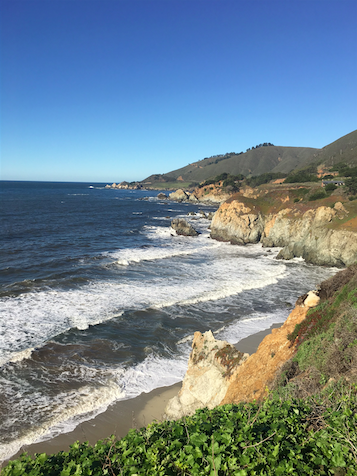 The glorious, big days are somewhat easy here. Night is still night, and nights are hard. At 2am the night before last, after getting a dozen messages from people telling me of signs they were sure they received from Caitlin’s soul, I thought, okay, I’m going to ask for a hard sign. I want a monarch butterfly to fly around me in a complete circle. Tomorrow.

And yesterday we went to Esalen for massages and to experience their famous hot sulphur springs.

Time has been a strange thing. Sitting in the hot water with the sea crashing below, all I could think was, Exactly four weeks ago today, Caitlin was in surgery and we were so relieved and happy. And now I am at Esalen, a place that seemed like Neverland.

Nick loved the energy at Esalen and afterward, went to look at the big farm garden there. I sat in an Adirondack chair overlooking the Pacific and I thought about the end of Mad Men and how I wanted Caitlin to see that I was there and a couple of monarch butterflies began flying all around… not right around my face, the way I’d envisioned, but in big swooping circles that took in much more than me.

A few people have said they enjoy reading Caitlin’s thoughts so here’s something relevant, as we all face the coming week.

With my big book, Sarum – that I’ve been reading that traces England from beginning of man to now — to this new book I’m reading – which does a similar thing with the slave trade and is already so so so good and opening up news ways of looking at slavery (for me) I just feel like plus alongside this election, which is challenging everything I took for granted ..::it’s an interesting and weird time to be alive and experiencing. I can’t help but imagine these times in the past that I read about, and then think how the time we live in now will just be something that happened to someone else, in the future….It will be this weird blip in history that is a forgone conclusion because it’s over, it’s sorted out. We learn about bad things that happened and somehow they don’t seem quite as unbelievable because the people in the future have figured out why it happens, and we know the ending.  I hope it doesn’t happen soon, but at some point the US will no longer be around, or it will be much different than it is now. And it won’t seem weird to people reading about it in history books. We will just seem like the dumb idiots of history who elected trump. Like the sheep in Germany who followed hitler. A question on a test somewhere. We parse the decades out and they all seem so different

– when I read Sarum I have a tendency to do a double take when things are different from say 1650 to 1690—when the area in the book has undergone a huge change. But of course in our modern history entire revolutions and wars happen in shorter times. Countries fall. We are all the same and we all have a collective fallibility and vulnerability. It can happen to any country and any place … but we also are all the same in that we never seem to really learn from history or believe WE are the ones making mistakes.

It’s part of why the idea of souls makes sense to me. This place is just like a ropes course for souls. A learning center. It never changes and the collective body of humans can never sustain their progress too too much or else there is not enough to challenge the souls. Imagine all the people living life in peace ✌️ John Lennon – well that wouldn’t really work if you believe we need to be challenged to grow. At least in the human form.

** The slave trade book was Homegoing, by Yaa Gyasi

Sarum is by Edward Rutherfurd