I haven’t seen Hamilton yet, but I know the music well and I keep thinking of the lyrics… The world turned upside down 🎶      My God, it’s so upside down right now, but everyone’s protesting, speaking up. It feels good, but if you’re feeling helpless, you can start here: Join the American Civil Liberties Union

Caitlin’s father is an immigrant from Ireland, a guy who came here without a green card, and worked hard and who has been employing dozens of people for thirty years.

I love this photo of Caitlin on a cold night—but just wearing a headscarf is a sign of bravery these days.  I can easily imagine some ignorant bully verbally or physically abusing her because of it. 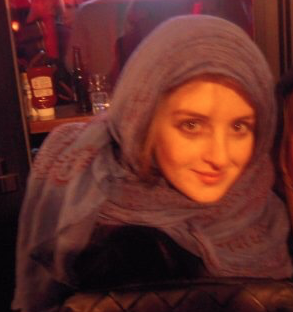 Or her having to face this, as she would have in an earlier time.

I was getting some stuff off her computer today, and I remembered she often kept little text windows open where she would jot down her thoughts. These two were still open, unsaved.

what on earth could i have to say?
how much should we self reflect?
wild rice
quinoa
papaya
And this.

Redemption song
what kind of a country are we? “I want to be my own nation” – a character in ___ says.  My mind can’t make sense of killing to protect a nation.  It’s not my mind actually.  It’s something else. My soul? My mind can understand it.  We live in a nation and we want the protection and rights it affords us so we have to be willing to fight for that.  People want to harm us….I would want to fight for freedom.  Its not anti fighting.  But as a person, deep down, can you ever really reconcile that?  Or is that all part of being human. Having to live with the reality that your life might mean someone else’s death.  In any scenario.

Jess and her wonderful artist mom, Stephanie Danforth, have been going to Kenya for years, where they do a lot of work for kids via the Daraja Academy and the Simama Project. They are there right now, and so is Andrew.  He took this opportunity to expand his world and do some good. Here are some photos from the past couple of days.

And Jess sent this earlier: a little rainbow where there has been no rain.

It turns out that rainbows can be found in the most unlikely of places.

Right after I posted this, my niece texted me.

So crazy. I just read your post on the blog and had to share this with you. I was driving home from NH yesterday and there was a rainbow in the clouds. It wasn’t and hadn’t rained though. I tried to get a pic, but just couldn’t capture it.  ❤

Did this story help you in any way? Sharing may help someone else. Click the buttons below.