After I wrote about signs the other day, a line I wrote in Cascade came to mind, to haunt me:

That was the thing about signs. You could read them any way you liked.

I thought about that as I went to get a pedicure in my hotel. I actually don’t really enjoy pedicures. I consider them to be maintenance, and I like them to be quick. Well, this was the slowest one in the world—-it took almost 2 1/2 hours. I tried to relax and enjoy it but all I could think of was how horrible and ultimately needless had been our darling girl’s partial amputation. I kept picturing us getting pedicures at various points in our life, at MiniLuxe in Boston, or on vacations in Miami, and later, when she had to drag the oxygen tank in with her. Her last pedicures I did myself, on her bed, because she no longer had the energy to go to a salon. The past year, I gave her leg and foot massages almost every day because it was the only thing that gave her relief from the near-constant painful aches she experienced.

I spent a lot of time with those legs. I have been mourning that left leg perhaps more than I should. I didn’t want to start crying in front of the pedicurist, so I tried to distract myself and halfheartedly looked through the basket of predictable women’s magazines. But—a surprise. Tucked in there was a New York Times Magazine from the end of November, with a cover story on Martin Scorsese. I’d brought that particular one into the hospital to read, and to give to Caitlin, because she had a deep appreciation of his movies. When she went on life support and we had to clear out her room, it must have been thrown away.

I’d forgotten about it. 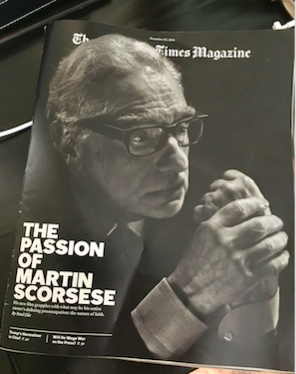 “In his new film, “Silence,” Martin Scorsese returns to to a subject that has animated his entire life’s work and that also sparked his career’s greatest controversy: the nature of faith.”

I read the article with interest and an ache in my heart, wishing Caitlin had been able to read it and discuss it with me. I wondered what she would have thought of the film. It seems to have received quite mixed reviews, but Caitlin’s opinion would have been the opinion I would most been interested in. She had a keen ability to analyze and to consider, with empathy, the most complicated subjects. See things other people didn’t see.

It’s a wonderful thing when your kid grows up and you can step back and marvel.

Her first day in the CTICU, when she was still able to speak, her nurse mentioned having been to Mass the day before.

Caitlin: “Do you believe in God?”

I wish I had the ability to remember, in detail, all that Caitlin said, but basically she talked about how she believed in something greater but thought that the various religions hadn’t gotten it right.

Now I think: Now she knows. All the stuff we talked about is no longer theoretical for one of us.

And I’m going to have to figure out faith for myself.

When Caitlin was 11, we realized, nearly overnight, that a stealthy mycobacterium had completely ravaged her left lower lung. The lobe needed to be removed. It was the only hope of stopping the organism from invading the rest of her lungs. There were many unknowns and absolutely no guarantees.  One day, before the surgery, I was sitting in my living room sobbing, sick with fear and dread, when I heard a voice—-clear and strong and female. The voice said, “Have faith.”

I sat up straight and looked around.

I thought about how it would be very easy to doubt what I had heard but that I must always remind myself that I had indeed heard it.

During these past 3 years, I hoped to hear that voice again. I never did. One thing that did happen, though, was that about a year ago, I was doing chest PT on Caitlin when I heard her voice, not her real voice, clearly say, “I’m dying, mum.”

I tried to unhear it. Tried to “have faith.” Hoped that that long-ago voice had been ‘good for’ forever.

Tolstoy had an existential crisis where he couldn’t figure out how to have faith…and decided the only logical thing he could do was to kill himself –  He spiraled out of control… he couldn’t think himself out of the problem of living, the meaninglessness of life, and the uncertainty of faith. He thought that if life had no meaning, which his reasonable mind believed because he could not prove the opposite, then the brave thing to do would be to end it. But he did not want to kill himself at all. He finally found his kernel of faith exactly right in front of him. His desire not to die, to keep on living despite the fact that he KNEW he was going to die, was a kind of miraculous leap of faith that we all do every day when we wake up. He figured the fact that faith even exists at all makes it a truth in and of itself. And he went on. (you can read this in his “A confession”).

I finished reading the Scorsese article as the technician finished the pedicure. Then I went out onto the beach. Down near the water stood a big flock of seagulls. I started to pass them, telling myself I couldn’t desperately look at every seagull you see, hoping for a sign.

But I turned to watch them anyway, and saw that the one closest to me was standing on one leg. He stood on it for so long that I thought perhaps he only had one leg. None of the other gulls were standing like that. I kept watching and waiting for him to move and found myself getting all choked up and happy and talking to Caitlin. She felt real and close for those moments and I thought, This is what you’re going to have to do: take whatever portal is open, whenever you can.

Did this story help you in any way? Sharing may help someone else. Click the buttons below.

Caitlin holding her godson Diego. ☀️Look at that little arm.
Kitten kitchen art here at this house.
🌍Little me on this planet of ours, which seemed vast a year ago, as I took in the great Sahara. Caitlin’s wait for transplant left me a bit unfazed by the forced confinement of this past year .. but I can’t wait till we can travel freely again. There is light ahead. ☀️
⭐️In Little Matches, I write a lot about signs and synchronicities, and how they just…happen, and that after a while, trying to discount them seems myopic. All last week, as I recorded the audiobook, the signs came so thick and fast that it honestly became comical. Every day as I drove the short distance to the studio,  radio tuned to a random station – none of it my own music – every single song had a message. Like this wings/lungs imagery. And subtle, inside-jokes that spoke only to me. Life has magic. As people like @lauralynnejackson and @karissaevemedium say: “Be open to signs. Ask for them. You will get them.”
This guy. A pretty nice Valentine, most days.
🎤📖Today I finished recording the audiobook for LITTLE MATCHES. As I read, I kept thinking, written words work, yes, of course they do, but with this I get to tell you the story as if I were talking to you in person. It's so authentic, so intimate and meaningful. David at @mixonestudios and Callie at @commonmodeinc made it a memorably pleasant experience for this recording newbie. Thanks to @harpercollins for making it happen. And to @kittencaitlin for hanging in that booth with me all week, and sending all the #signs✨
🎙My first day recording Little Matches. A duo of a good director and engineer and a voice that thankfully stayed intact all the way to page 140 (out of 386)  -- farther than we thought we would get. I’m keeping my mouth closed for the rest of the night to give the throat a break. 😷 Can I say how grateful I am that I get to do this for my daughter? As I was driving to the studio, a completely random Apple music station was playing and I said, “Next song is a message from Caitlin.” 💫 💪🏼
Caitlin took this video in 2016 in Pittsburgh. That’s her oxygen concentrator in the background. Little Hen, the groundhog pup, would be 17 today. 💙 Happy birthday, little pup. I miss you both so much.
❄️Deep inside a nor’easter and it is calming - there is suddenly so much to process and plan for the coming months but instead of a list for February, I think I will just leave this page as is . 💫